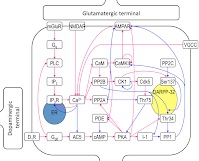 We have constructed realistic models of the brain at the levels of molecular, cellular, and network to understand the neural mechanisms of the learning and decision-making.

At the molecular level, we constructed a signaling cascade model of the medium spiny neurons in the striatum. We predicted the positive feedback loop amplifies the dopamine signaling (Nakano et al., PLoS Computational Biology, 2010). We also investigated the interaction between adenosine and dopamine based on experimental research (Zhang et al., Neurochemistry International, 2018).

At the cellular level, we constructed a multicompartment electrophysiological model of the striatal cell including ion channels and receptors with realistic morphology taken from an experiment (Nakano et al., Frontiers in Computational Neuroscience, 2013).